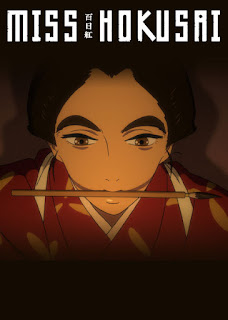 An anime film about O-Ei, a Japanese artist. The story is some time in the past, in a pre-modern time, probably the early 19th century. Her father is a well known artist and spends most of his time in his studio. Both O-Ei and her father live in Edo. He is best known for painting the Wave. O-Ei's mother, is still alive but for whatever reason Hokusai doesn't want to live anywhere other than his studio. O-Ei works besides him but also seems to see herself as his caretaker.

Based on what I can find this story was taken from a manga from the mid-1980s. I don't know if it was ever translated into English, or even the title of it.

The movie is a series of vignettes. Most involve O-Ei interacting with others, including her father, a couple of his proteges, her younger sister, her mother, and patrons. If the movie has a thread then I failed to find it. I feel as though there is some background information I am missing. The movie is very beautiful to look at but it feels incomplete.
Posted by davelevine at 11:58 AM