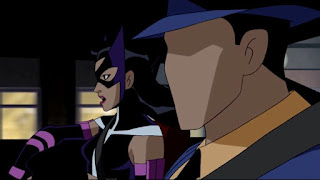 Huntress gets kicked out of the League by J'onn J'onzz after she attempts to assassinate, Mandragora, a villain who is in federal custody. Huntress, visits the Question before she leaves the Watchtower. She hopes that he can help her locate Mandragora.

Black Canary and Green Arrow are guarding Mandragora while King Faraday interrogates him. He isn't being cooperative. He insults both superheroes and then escapes when they aren't in the room.

Huntress and Question show up late. They fight with Green Arrow and Black Canary until they discover that Mandragora is gone. They two teams split up. Green Arrow and Black Canary tail Huntress and Question, suspecting that they know more than they admitted. The chase leads them to the dock where they find Mandragora awaiting the arrival of a ship.

Question reveals to Huntress that he knows about her past. He retells the story of how her parents were killed by Mandragora when she was a little girl. Her father was a crime boss and Mandragora worked for him until the fateful day when he decided he no longer wanted to do so. Young Helena saw it happen from the closet in which she was hidden.

A young boy steps off the ship before the heroes get to Mandragora. The boy is his son who had been captured by another criminal organization. The superheroes strike. Mandragora proves to be a little too much for them. Huntress has the opportunity to get her revenge and kill Mandragora but when she sees the look on his son's face she can't do it. It brings back memories of witnessing her parents deaths. She brings down a pallet of iron girders on top of Mandragora, instead. It isn't enough to kill him but it slows him enough for the authorities to take him back into custody.

Huntress had previously appeared in three episodes of JLU but they were all cameo appearances. Question had one significant appearance prior to this one in Fearful Symmetry. This is King Faraday's first appearance in the DC Animated Universe.

See also: Batman/Huntress: Cry for Blood which predates this episode by a few years and must have been an inspiration of sorts. Cry for Blood was written by Greg Rucka. Double Date was written by Gail Simone. I didn't ready Cry for Blood until after I saw this cartoon. There is a character named Mandragora in Cry for Blood but he plays a much smaller part in that story and looks very different.
Posted by davelevine at 7:56 PM